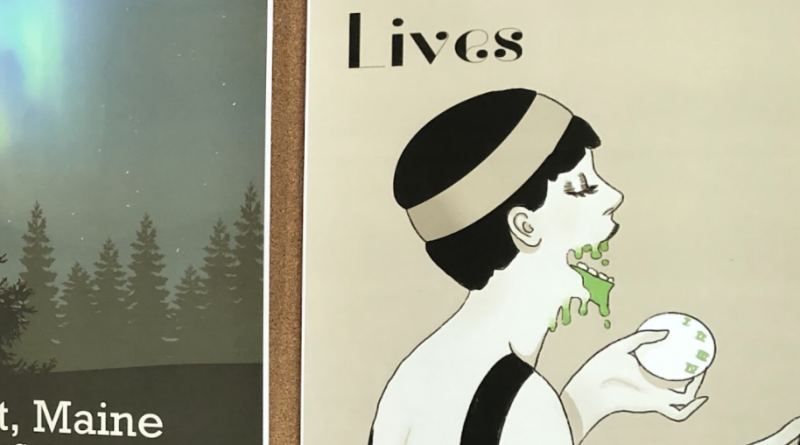 The Seven Hills School––There are a handful of people in the Black Box Theatre on a Friday afternoon, less than two weeks before the first showing of the Upper play “These Shining Lives.” In the minutes leading up to 3:30, when play practice begins, the air is casual. Students laugh and socialize as they relax after the school day. However, once the clock hits 3:30, they sink into the minds of their characters and begin running through scenes. As the date for the opening show inches closer, Canvass decided to observe a play practice and dive deeper into what goes into putting a show together.

“These Shining Lives” is a play centered around the “Radium Girls” of the 1920s. It is based on the true story of four women who worked at the Radium Dial Company. In the factory, they unknowingly used deadly paint with radium in it. The play follows these four women as they sue the company and push their case to the Supreme Court. “These Shining Lives” also shows the way companies treated their workers during this time.

Seniors Aahana Katneni, Wendy Woffington, and Cece Hood play Pearl, Charlotte, and Catherine, respectively. Katneni, who’s participated in several plays in the past, said her favorite part about rehearsals is when the actors begin going several pages without stopping. “It feels like it’s coming together,” she said.

Katneni also was a part of the fall musical, “The Addams Family.” She said that, though she enjoys musicals as well, in plays, you “get the story more.”

Play practice began with a scene with Hood, who plays the lead. She ran through the scene a few times. After each run of the scene, Marc Raia, the theatre teacher, gave notes that focused on details like on-stage movement and the importance of listening as a form of acting. Raia told the actors that it was important to “get the book out of their heads” as they ran through these scenes. Raia also analyzed the characters themselves and how that might impact the actors’ movements, behavior, and tone.

Katneni, Hood, and Woffington all play best friends in the play. They happen to be good friends in real life too. They said that they’ve often been told to just act naturally with one another in the scene where their characters are laughing and talking with one another. “It’s weird because it’s scripted,” Katneni said. “We just need to act like ourselves like we do in real life.”

The play will be performed in the Black Box Theatre; however, the stage structure will be unique. “In the round” is a type of theatrical setup where the audience is placed on multiple sides of the stage, all with different vantage points of the performers. Actors will be moving all around the space, including around and behind the audience.

When asked what they would want people to take away from this play, Hood said, “Women empowerment.” Katneni added by saying, “Even when it feels like there’s nothing you can do, you can do something.” Katneni also said that friendship and family are essential themes of the play.