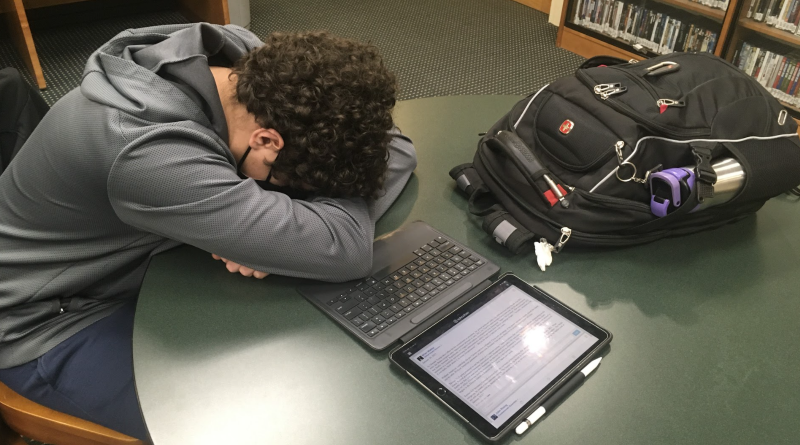 College Early Decisions have rolled out for Seven Hills seniors, and those who have received good news have begun to feel relaxed. Sometimes, they feel too relaxed. This phenomenon is the “disease” known as Senioritis. Unfortunately, the school year is only halfway over, and these seniors still have five more months left of work before graduation.

Jack Fechter, a prospective freshman at Dickinson College, said, “I was accepted to Dickinson on the last week of school before winter break. While I was writing my English exam, my dad came into my room and told me I got in.” Indeed, this moment is a time to celebrate. After four years of high school, an early college acceptance letter is a source of relief and pride. However, these feelings can get out of control and transform into Senioritis.

Fechter said, “I’ll just kinda coast, but my parents will want me to get good grades. I felt that my grades have dropped a little. I will be a little lazier and do more activities outside of school.”

One way of combating senioritis is to remain motivated. Before his acceptance, Fechter said he was equally stressed for the first quarter of the senior year because that is just as important as your junior year. Adding to Fechter’s statement, the second half is also important because colleges have the right to rescind offers. By maintaining the same hard-working attitude from junior year and the first half of senior year, 2022 seniors can curb Senioritis.

Furthermore, seniors can also set goals for themselves to maintain their productivity. Justin Gao, a prospective freshman at George Washington University, said, “I would like to improve my Chinese as well as explore new hobbies.” Reflecting on his second semester, Gao said, “My grades will probably drop, but it would not be by too much. I want to keep them somewhat consistent. I want to maintain decent grades so I can maintain some pride.” Despite the feeling that high school is over, senior year is still busy, even in second semester. Gao said, “School isn’t over yet, so I still have some stuff to do.”

Overall, Senioritis is a serious “disease.” It risks a student’s GPA and academic standings with their college. Thus, Seven Hills seniors should balance their newfound sense of relief and their responsibilities during this home stretch.