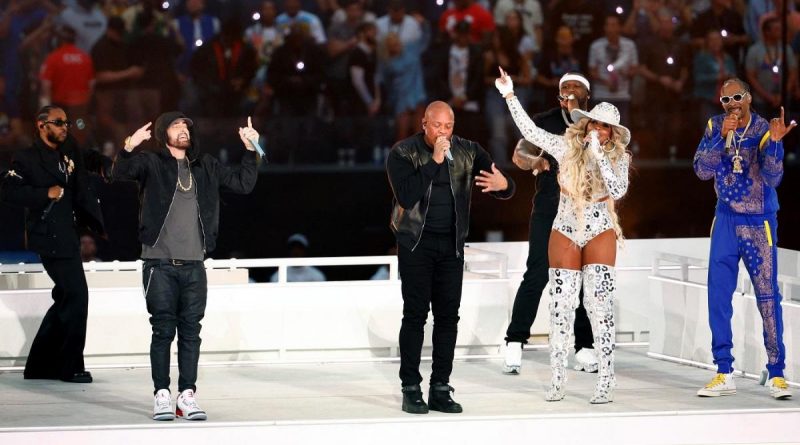 The Seven Hills School — The Super Bowl this year was a significant upsetter for my friends, family, and all of Cincinnati, but the halftime show was easily a highlight of the game. This year, Generation X took over during the halftime show. The fifteen-minute production featured five iconic performers: Dr. Dre, Snoop Dogg, Mary J. Blige, Kendrick Lamar, and Eminem. The performers also brought out a special guest from the early 2000s: 50 Cent.

I don’t know about anyone else, but I personally loved the halftime show because I grew up listening to all of the performers, especially Mary J. Blige. They all performed some of their top hits from the peak of their careers. I watched the special performance with my family, and it’s safe to say we had a great time.

The performance started with a video montage of Compton, California, Dr. Dre’s hometown, which led to a rendition of “The Next Episode” rapped by Dre and Snoop. I loved Snoop’s outfit because he wore a blue and yellow bandana tracksuit, paying homage to his hometown. The next song was “California Love,” originally by Dr. Dre and the legendary Tupac Shakur. The backup dancers during that song had my sister and me going crazy. The iconic duo definitely started the show off strong.

The next performer came as a surprise to the whole country. Brought out as a special guest, 50 Cent hung upside down and rapped along to his iconic “In da Club” like he did in his music video from 2003. To say I was excited about his guest appearance is an understatement. The “Candy Shop” rapper came out with his iconic “50” gold chain. My family and I started to go crazy. His backup dancers were incredible, and my sister and I failed to match their dance moves.

Once the rapper was finished with his song, out came the queen herself, Ms. Mary J. Blige. Blige performed what is probably her most well-known song, as well as a personal favorite from my childhood, “Family Affair.” I had an appreciation for Blige’s outfit as she wore a sparkly silver bodysuit with over-the-knee boots to match. After the upbeat dance song was over, she switched the vibes to her slower song, “No More Drama.” I have vivid memories of that song from my childhood because that was one of my dad’s favorites from the album.

Behind Blige was Lamar with his background dancers in cardboard boxes. He began his set with “M.A.A.D City.” His dancers were featured with bleached hair and facial hair. I especially loved the dancers because their performance was crisp and precise. The song later transitioned to Lamar’s “Be Alright.” Lamar and his dancers did a great job, especially with the little time each performer was given.

Everyone knew what was coming next once Lamar had finished his set. The one and only “Slim Shady” himself, Eminem performed his hit “Lose Yourself” from the movie “8 Mile,” which he starred in. Eminem brought out a special guest, one you had to look for: Anderson .Paak on the drums. I enjoyed the live band he performed with. That was the only song he performed that night, and I wish he did one more.

To close the halftime show, Dr. Dre paid tribute to his friend and west coast legend, Tupac Shakur, by playing the opening of Shakur’s “I Ain’t Mad at Cha” on piano. As soon as Dre played those keys, I immediately had chills. I was secretly hoping that a hologram version of Shakur would come out and perform, but I forgot it was broad daylight during their set. Those piano keys smoothly transitioned to “Still D.R.E.,” Dre’s song that he has with Snoop Dogg. All of the performers of the night joined the duo for the show’s final song.

I had a great time watching the halftime show with my family because it filled me with a lot of nostalgia. The only thing about the show that I would change is I would have them perform one to two more songs each.