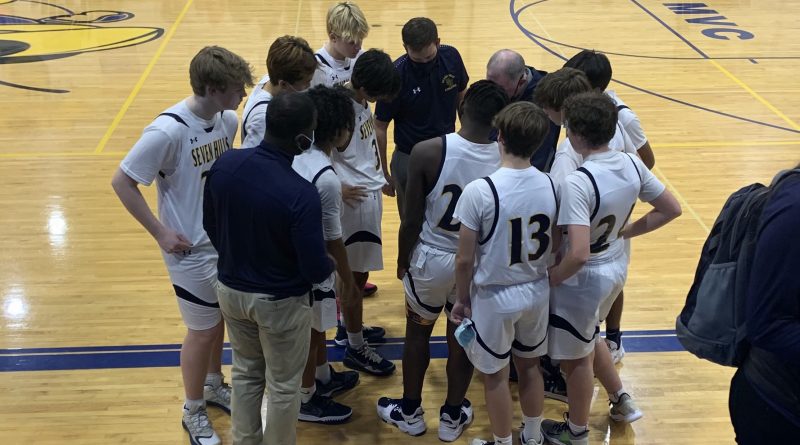 The Seven Hills School — The Junior Varsity (JV) Boys Basketball team has been doing fantastic this year and is 7-1. However, the skill level is not the only reason for this team’s success. The JV team has several upperclassman leaders who help infuse the team with the Seven Hills value of community.

Junior and player Daniel Yi said, “The JV season has been going phenomenal. Despite a minor hiccup against Indian Hill, we’ve really been going strong.” Indeed, this team builds comfortable leads and destroys most of its opponents. However, Yi said that does not diminish the hard work, the hours, and the special moments the team has shared.

“I think it’s been really fun. A lot of dubs. A lot of new members. The team does have seven juniors, so it’s been good fun,” said junior player Ryan Meador. When asked about his experience with seven juniors on the team, Meador said, “It means that we have a lot of leaders. We are working hard to build a culture of winning at this school and to be mentors to those younger guys who look up to us.”

Yi shared a similar sentiment about being one of the leaders for the younger players. “Being one of the seven juniors, I feel like there is a responsibility to the sophomores and freshmen to be role models. For example, the other day Nick Cohen [a sophomore] needed help tying his shoe and I didn’t hesitate to show him the ropes, if you will. And it was a great bonding moment for the team in general,” said Yi.

While they have gained popularity on the court, the JV team has also found success with their widely followed Instagram page @barstool7hillsjv. The Instagram account posts highlights and memes following each game.

“[The barstool instagram] started with three guys and a dream. It was myself, Daniel, and Jai. And we thought, how can we take this team to the next level? Daniel was the first one to come up with the idea of having a Barstool,” said Meador.

“I came up with the idea because people all around me were saying, ‘Daniel, I just couldn’t catch the JV game,’ or ‘I really wish I could see the JV game, but I had to do homework,’” Yi said. “Instead of them coming to the game, we brought the game to them. We opened up the Instagram, and it was a hit.”

Meador said that there is a sense of fun and community about the Instagram account. “We’re not just posting our highlights, there are funny moments. Those moments that make people see us more than just athletes: they humanize us,” said Meador.

When asked if he had anyone he wanted to thank, Meador said he wanted to shout out Seven Hills Athletic Director Scott Willard for assembling the team. Willard began the season as the JV coach but had to back down due to time conflicts with his athletic director position.

“Our season is dedicated to Coach Mitch, our freshman team coach. He shaped me to be the man who I am today,” said Yi.