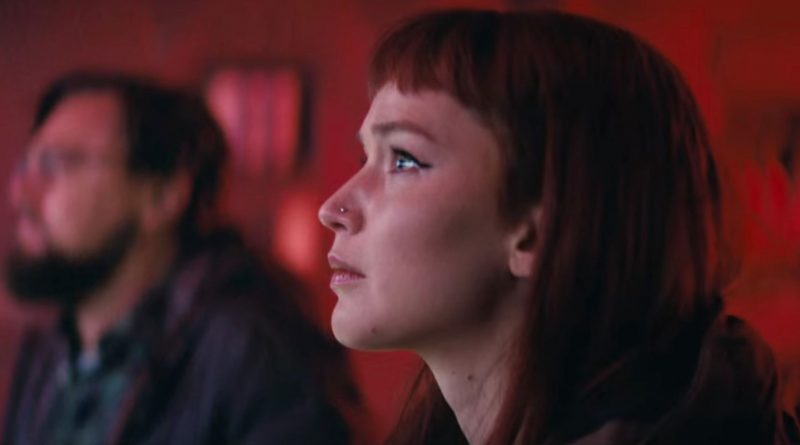 Don’t Look Up, the Netflix film centered around two astronomers trying to tell the world about a rapidly approaching asteroid takes dark, political satire to a whole new level.

The movie, which earned a 54% rating on Rotten Tomatoes, tells the story of scientists frantically urging the public to find a solution about the comet. Despite their fact-based predictions and verified math, the comet is largely ignored by the public and swept under the table by the White House.

Even though it is a story about how the world ends in six months, Don’t Look Up is a crystal-clear reflection of the public response (or lack thereof) to the rapidly approaching climate crisis.

The cast, which includes Jennifer Lawrence, Leonardo DiCaprio, Meryl Streep, Jonah Hill, Cate Blanchett, and Timotheé Chalamet, give notable performances. Each character represents a distinct group in society, from those urging for action to adamant non-believers to those who laugh at it all and are (astonishingly) ignorant.

Lawrence’s performance is especially raw and emotional. Her frustration and panic throughout the movie accurately portray what the younger generations go through in real-life crises. Her character, Ph.D. candidate Dibiasky, opens the film by discovering the comet that is set to impact Earth’s surface in only six months.

After going on a talk show to inform the public, the astronomers are largely ignored. Dr. Mindy, played by DiCaprio, gets praise on social media for his looks and Kate Dibiasky, played by Lawrence) is ridiculed through memes.

President Orlean, who gives her son the job of Chief of Staff and only promotes the comet to turn attention away from her recent sex scandal, is an uncanny portrayal of Donald Trump. When creating her own campaign against the scientist, her crowds are thousands of fans clad in red hats with the motto “Don’t Look Up” (sound familiar anyone?).

When Orlean finally decides to hear the scientists’ plan, a billionaire reveals that the comet has trillions of dollars worth of rare metals. Hence, she immediately starts a campaign to mine the comet and create jobs.

After the scientists finally give up trying to convince the government, they form their own campaign (“Just Look Up”) as the comet is so close to Earth that it is visible to the naked eye. For all of their efforts, including a theme song from pop star Riley Bina, played by Ariana Grande, President Orlean makes her own campaign: “Don’t Look Up”.  As the end approaches and nothing can be done to stop the comet, Mindy and Dibiasky have a final meal with their loved ones, President Orlean and a select group of her followers get on a high-tech spaceship, and the rest of the people continue to ignore the apocalypse.

The ending, which takes place over 22,000 years in the future, shows the group of people who went with Orlean arriving at a new, habitable planet. Orlean is eaten by a strange animal, showing how there was truly no escape for those who denied the comet was real. Even though they made it to a new planet because of their access to sophisticated technology, they ultimately met the same fate as the people on Earth.

After the comedic death of Orlean and the ‘survivors’ of Earth, I didn’t know whether I should laugh or cry. The movie felt oddly choppy at times as it bounced back and forth between sarcasm and anxious moments, especially towards the end when the comet hits and pulverizes all those left on Earth. However, the film’s parallels to real-life made it impossible not to laugh at. From the social media responses to political scandals and cover-ups, the humor made the apocalyptic theme seem less daunting.

Movie production was scheduled for April 2020 but actually started in November of the same year. The movie was intended to reflect how people have reacted to climate change but is really just a portrayal of how and why our society chooses not to believe in science. Despite being written before the COVID-19 pandemic, it is also a sinister portrayal of society’s backlash to the coronavirus.

Overall, I would give “Don’t Look Up” a 7/10 rating for the quality of acting, accuracy to real life, and humor.